Concerto in the Italian Style in F major, BWV 971

Partita No. 2 in D minor, BWV 1004, including the virtuosic Ciaccone

The Kennebec Early Music Festival is supported by grants from the Edgard and Geraldine Feder Foundation, the Davenport Family Trust, and the Maine Arts Commission, with major sponsorships from Bath Savings Trust Company and William Raveis/Carleton Real Estate.

Elizabeth Blumenstock’s violin was made by Andreas Guarneri (Cremona, 1660), the founder of the dynasty of renowned Guarneri violin-makers in the 17th and 18th centuries.

Sarah Freiberg’s violoncello was crafted by Joseph John Merlin (London, 1784), an ingenious mechanic whose inventions included various types of intricate clocks and automata, inline skates, a perpetual motion machine, and mathematical and keyboard instruments which he displayed in Merlin’s Mechanical Museum in London.

Linda Skernick’s harpsichord was built by Yves Feder in 1981, and is based on a late 17th-century Flemish pattern, with scaling and plucking points done to an 18th-century French design. The sound of the instrument is best described as Franco-Flemish. The motto inscribed on the harpsichord lid HONI SOIT QUI MAL ME TOUCHE is a humorous take on the motto of the English Crown, Honi soit qui mal y pense, which roughly means curses on he who plays me badly.

Tamara Friedman’s fortepiano was modeled after a 1780s instrument by Johann Andreas Stein (Augsburg) and is the type piano that so captured Mozart imagination in 1777 that he began composing his long series of piano sonatas, as well as his sets of variations and fantasias.

Widely admired as a Baroque violinist of expressive eloquence and technical sparkle, Elizabeth Blumenstock is a long-time concertmaster, soloist, and leader with the San Francisco Bay Areas Philharmonia Baroque Orchestra and American Bach Soloists, and concertmaster of the International Handel Festival in Göttingen, Germany. In Southern California, she is Music Director of the Corona del Mar Baroque Music Festival. Her love of chamber music has involved her in several accomplished and interesting smaller ensembles, including Musica Pacifica, Galax Quartet, Ensemble Mirable, Live Oak Baroque, the Arcadian Academy, and Trio Galanterie. An enthusiastic teacher, Elizabeth is on the faculties of the San Francisco Conservatory of Music, the American Bach Soloists summer Festival and Academy, and the International Baroque Institute at the Longy School of Music.

Sarah Freiberg is principal cellist of Boston Baroque and a tenured member of the Handel and Haydn Society. She has performed with the New York Collegium, Philharmonia Baroque Orchestra (San Francisco), Portland Baroque (Oregon), Seattle Baroque, the Boston Early Music Festival, and Arion (Montreal). As a corresponding editor for Strings magazine, she has contributed dozens of articles and reviews on a wide range of subjects. Sarah edited the long-forgotten Guerini cello sonatas for both PRB Productions and Broude Brothers, and recorded both Guerini and Laurenti cello sonatas for Centaur. As well as teaching in the Historical Performance department at Boston University, she is Chair of Strings and Chamber Music at the Powers Music School in Belmont and teaches at the Amherst Early Music Festival. Sarah can be heard on numerous recordings, including as soloist on the Boston Baroque CD of works by Vivaldi and Geminiani.

Pianist Tamara Friedman, praised for the depth, wit, and humor of her performances (Seattle Times), attended the Oberlin Conservatory and received her masters degree from the Mannes College of Music (NYC). She has collaborated with such artists as Stanley Ritchie, Jaap Schröder, and Max van Egmond, and appears with violinist Elizabeth Blumenstock as Duo Amadeus. In the Pacific Northwest she has performed on the Seattle Camerata, Allegro Baroque and Beyond, Belle Arte, Early Music Guild, Gallery Concerts, and Mostly Nordic series and for the Governors Chamber Music Festival. She has been the featured performer in early piano workshops for Pacific Lutheran University (Tacoma, WA) and the Western Early Keyboard Association, and maintains a private studio in Seattle, where she teaches modern piano and fortepiano on her collection of eighteenth- and nineteenth-century keyboard instruments, which is on display at SEKM! – the Seattle Early Keyboard Museum. Her summers are spent in Bath, Maine, where she also has a group of historic pianos.

Harpsichordist Linda Skernick served on the music faculty of Connecticut College, 19792015, when she moved to Bath. Her career has included solo recitals at the Los Angeles Harpsichord Center, Washington DCs Phillips Collection, the Cleveland and Birmingham Museums of Art, New Yorks Lincoln Center, and he Tchaikovsky Conservatory in Moscow, as well as at the Yale Collection of Musical Instruments and at Wesleyan University. She has toured with Alexander Schneiders Brandenburg Ensemble and performed with Gerard Schwarzs Mostly Mozart Festival, as well as the Seacliff Chamber Players Long Island Bach Festival, and many local Connecticut series, including the Robbie Colomore concerts in Chester, the Essex Winter Series in Essex, the George Flynn Classical Concerts in Clinton, and Music Mountain in Falls Village. Linda was a member of New Yorks Tafelmusik Ensemble and the New York Baroque Consort, and has been soloist with many orchestras and chamber series throughout Connecticut. She has twice been the recipient of grants from the Sylvia Marlowe Harpsichord Society. Linda appeared both as soloist and in chamber music with the Connecticut Early Music Festival and John Solums Hanoverian Ensemble. She was also a founding member of The Klezzical Tradition, a group playing traditional klezmer and classical music. Many of her performances, including several guest concerts at Music Mountain, Falls Village, Conn., have been broadcast by National Public Radio. She appeared live on WQXR’s “The Listening Room” (New York City) and WGBH’s Morning Pro Musica (Boston).

Make great music and great friends at the Westerhoff-RFA Music Camp this summer!

This week-long camp offers campers the chance to learn from music teachers who have a proven ability to work with youth. Activities alternate between individual instruction, practice, and performance to group lessons, music-making and fun musicianship classes. Campers learn to play music with others, write music and advance their individual skills. Each day will include group singing and a noontime outdoor recreational period.  On Friday, campers will showcase all that they have learned in a performance for family and friends.

Ages: 8-18
Instruments: All instruments and voice
Prerequisite/eligibility: 6 months experience playing an instrument or studying voice, or singing in a group setting (chorus or choir); students with no previous musical experience are also encouraged to apply and will be considered for participation on an individual basis.
Camp Size: A maximum of 20 students working both individually and in small and large groups.
Location: RFA Lakeside Theater and other downtown locations in Rangeley, Maine.
Dates, Time: August 7-11, 9 AM – 3 PM. Before and after hours available for additional fee.
Instructors: David Iskowitz of Westerhoff School of Music, Timothy Macek of Howard University, and Erin Smith: Music Instructor at RLRS.
Tuition: $200. for the week (financial aid available); ($50 nonrefundable deposit required upon registration)
Application: Final deadline: July 22, but we recommend early registration to ensure placement.

The Westerhoff/RFA Music Camp is presented by the Westerhoff School of Music and the Rangeley Friends of the Arts. It is supported by grants from the Maine Community Foundation and the Maine Arts Commission.

The best and most comprehensive course of its kind, WFA offers relevant and realistic first-aid training for seasonal outdoor activities or short term wilderness endeavors and pursuits.  Wilderness First Aid is a two-day introduction to general medical concepts and basic life support skills. It is targeted to the outdoor enthusiast on day trips or short…

The Rangeley Friends of the Arts’ 37th annual “Art in August” will be held in the heart of Oquossoc Village. Always the first Thursday in August, the show will take place on August 3rd from 10 AM to 4 PM.  Artists’ exhibits will be in the Oquossoc Park.  Come see this year’s offerings as the tradition of presenting fine art and fine craft continues in the Rangeley Lakes Region.

Oquossoc Village is a location sure to please visitors and patrons of fine art and fine craft.  All amenities are within easy walking distance of the artists’ displays and there is ample parking.  Local restaurants and grocers will happily accommodate your desire for lunch or refreshments so you can visit each exhibitor and make selections at your leisure. 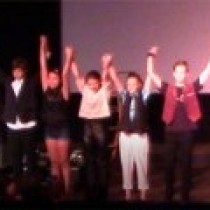 Let’s Get Into the act!
for students entering 7th grade through 12th grade or age 13 through 18 years old

The week will combine improvisation, scene work and developing onstage skills for young actors. Performers will play games and work creatively to explore character development, movement, and story-telling. The camp will include the rehearsal of a short show to be performed at the end of the week.

LOTS OF FUN… During the week we will produce a show and focus on the following topics: improvisation, scene work, developing the character, movement, story-telling, reaching your objectives, and developing on-stage skills.

Talley Murphy has directed the RFA teens for the last three years, and has been involved with RFA and Dodgeball Theatre summer youth programs since 2008. She studies theatre at Barnard College, where she’s currently completing her senior thesis in directing. Most recently, Talley directed Romeo and Juliet for Awake At 3, A Midsummer Night’s Dream for RFA teens, Macbeth in the Basement for the Capital Fringe Festival and A Wrinkle in Time for Columbia University Players. Talley’s work focuses on young artists, collaborative productions, and classical texts.

SPACE IS LIMITED – Registrations accepted on first come -first served basis. The cost for the week of fun and professional instruction: $150.  For more details contact: Millie Hoekstra: 207-864-2963 or milliehoek@gmail.com

Drama Camp is for students entering second grade through sixth grade, or ages 7-12.

The morning will include dramatic skill development, with lots of games and creative activities.  Included will be work in PANTOMIME, STORY TELLING, CREATING CHARACTERS, ENVIRONMENTS, EMOTIONS, IMPROVISATIONS and CREATIVE MOVEMENT.

The afternoon time slot will focus on production work.  This time will be used primarily on rehearsing the selected show to be shared at the end of the week.

Where: RFA Lakeside Theater
When: July  10-14, 2017  9:30 AM to 3:00 PM
Who: Students entering 2nd grade through 6th grade. Ages 7-12
Cost for a week of fun and professional instruction: $150
Director: Anne Crump is a resident of Methuen, Massachusetts. Having received her BFA in Acting from Drake University she is excited to get creative with the children who summer in Rangeley. Anne has also studied at the National Theater Institute at the Eugene O’Neill Theater Center. You may have seen Anne on stage here in Rangeley as well as in Farmington.