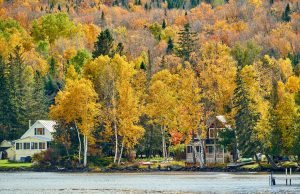 Despite the crippling pandemic conditions of 2020, the property market of Maine has not only remained stable, but has experienced unprecedented growth. Maine Listings, a subsidiary of the Maine Association of Realtors, reported that, in the first nine months of 2020, sales of single family homes in Maine were up 2.6 percent from what was already a record pace set the year before.

Prices went up, too. In September 2020, Maine home median prices were sitting at $273K – a massive 19 percent up from the September of the previous year. Additionally, September’s overall sales volumes increased by a whopping 22 percent year-on-year, going up by 425 properties in that month alone.

Maine is well known to be a beautiful state with a lot to offer. Combining glorious coastlines with stunning mountain ranges, its landscape alone is hard to beat. Added to this, the people are amongst the kindest you will find, and living amongst beautiful scenery that may include a majestic moose or two is hard to resist. So, it’s no surprise that people searching for a new way of living are looking to Maine for a healthy change.

President of the Maine Association of Realtors, Tom Cole, attributes the demand to the combination of the country’s COVID-19 response, Maine’s unique lifestyle appeal, and the historically low mortgage rates being witnessed.

“With more buyers than sellers in most markets, we are seeing strong competition, faster sales and increasing prices,” said Cole.

COVID-19 spent the last year rocking the world and causing most to look within and reevaluate their way of life. Many who had previously enjoyed the hustle and bustle of city life were afforded the new option of working from home and with that came the notion that suburban or even rural living was fast becoming a viable option. With it’s quality of life, wide open spaces and low incidence of COVID-19, Maine became an undeniably appealing option.

The statistics speak for themselves when it comes to Americans looking for a lifestyle change. Buyers from out of state have in the past accounted for around a quarter of Maine property purchases, but through the pandemic, this ratio steadily rose to almost a third. In September 2019, 445 homes were bought up by out-of-towners, compared to a year later in September 2020 when that figure rose to 735.

According to a recent study reported by Redfin, Maine’s most populated city of Portland is now one of the most competitive locations to purchase a property – it is also the only New England city that made an appearance in the top ten.

Portland and its surrounding suburbs are a significant drawcard for city dwellers looking for a change, as it offers an enticing mix of both big city living and New England charm. Homes in Portland are reportedly receiving an average of 5 offers and are selling within just 9 days. According to Redfin’s report, the average sale price in Portland last month was at $408K, seeing an increase of 21 percent from the year before.

As well as Portland, Maine’s largest town of Brunswick has also been competitively performing. Average home sale prices in Brunswick reached $318K last month, up 7 percent from the previous year.

Despite Maine’s property market stability overall so far, it is still ultimately at the mercy of the nation – and the nation’s forecasts still have multiple wildcards in play. The U.S.’s successful management of the COVID-19 spread whilst simultaneously rolling out mass vaccine distribution will ultimately prove to be the most impactful. Additional lockdowns and further quarantine restrictions could put a dent in housing inventories and sales figures, thus slowing down the market and adding further pressure to buyers.

In addition to this, the possible threat of a double-dip recession still looms as we head into the new year. Economic growth and business stability could be broadly impacted by less consumer spending, leading to a cooling in demand as would-be buyers vanish from the market, causing prices to drop.

That said, industry experts appear to be in fairly firm agreement regarding 2021, predicting that prices will continue to rise, but thankfully for most, at a slower pace than we have been witnessing. CoreLogic are forecasting a very conservative growth of around just 0.2 percent, whereas the Mortgage Bankers Association (MBA) predict that home prices in 2021 will grow in the range of 2 percent. Listings delayed by the pandemic are largely driving these predictions, as inventory will start to increase and drive down the out-of-whack supply and demand ratio that buyers have suffered since early last year.

Whilst Maine is not immune to the nation-wide market volatility that may still arise this coming year, it has certainly proved thus far to be a particularly resilient market. Lifestyle changes will still be driving trends for some time to come, and with all that Maine has to offer, its position is strong.

Tips For Finding The Perfect Valentines Day Gift For Her
January 26, 2023 no comments

Top 4 Reasons Your Next Vehicle Should Be A Motorcycle
January 26, 2023 no comments

10 Tips to Promote Your Automotive Company
January 23, 2023 no comments

How to Find Your Perfect Luxury Home
December 14, 2022 no comments
Menu ✖